It’s been a very rocky month.

Since my second breast surgery and learning of progresion in my ribs, I’ve started a new treatment of Ibrance/Faslodex and had another PET Scan.

Going into the PET Scan, we were expecting to find further progression in my lung and liver. I was very relieved to learn that was not the case. However, there was ‘intense uptake’ in my tonsils and in two quadrants of lymph nodes in my neck. I needed to know if this was the beginning of something else so I saw my ENT. I was again relieved to learn that, for now, I’m OK. Having my tonsils out should be considered but as long as it’s not an immediate concern they are staying put.

While all this uncertainty was playing out I had a lot of time to think of how I see my future playing out and how I want things to be. It renewed a belief that I’ve had since my diagnosis and that is I don’t wish to have this disease consume me when my treatment options end. I want to die on my terms and when I determine its time.

Last year I contacted Compassion & Choices and worked with them on an Opt ed piece that was published in my local newspaper November 2015. I was later interviewed by local media about the Death with Dignity when New York State law makers announced they wanted to introduce legislation.

This past Wednesday I was interviewed again when Senator Amy Paulin announced she was joining the cause for Death with Dignity legislation after a family member suffered thru a cancer death.

I feel like this is a renewed direction I need to go in. Not only for me but for those that also want to have this same choice. And that’s what this is. It’s a choice. It’s not mandatory. Its not something to get talked into. It’s an option. It’s something you can decide NOT to do too.

Some people that oppose this option do so because of religious reasons or because they fear that the person will somehow be taken advantage of by others. In other words, they’d be ‘talked into’ it because it’s the ‘easy’ option for the caregivers.

Growing up Catholic, I’m very confident and comfortable knowing that MY God doesn’t want me to suffer and more importantly wouldn’t want my Son to watch me suffer and die. MY God wants me to leave my Son with all the best memories I can and non of them include me laying in a bed wasting away or struggling to breathe.

It’s OK if this isn’t right for you. It’s OK if you prefer the biblical, regular way to die. That’s why this is a choice. MY choice. And I am going to fight for this the best I can so this is an option I can choose from. 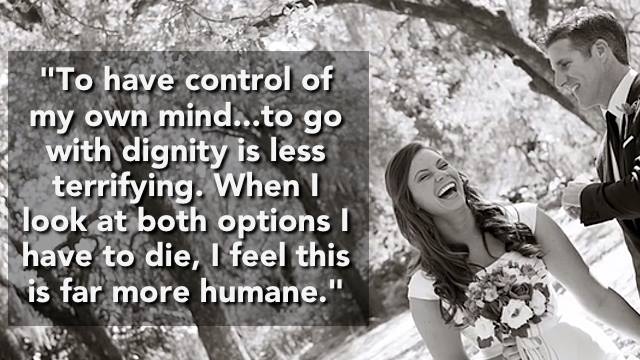 12 thoughts on “The Murky Waters Have Become Clear”