I should have listened to my gut and stayed in sunny Florida but you know, Adam and Bella needed me.

Spring break was uneventful (for the most part) until Wednesday the 22nd. I had my monthly Oncology and treatment appointment and was also looking forward to seeing a friend and fellow Stage 4 patient. Our appointments finally lined up on the same day. It was going to be nice to see a friend there for a change.

When I arrived, of course the nurse called me immediately and I didn’t have time to chat with Melissa for very long but we met up again in the infusion room. We eventually had some time to chat before we went our separate ways and that’s when my day went sideways or I should say “fell apart”.

I went to pick up lunch for Adam and as I walked into the restaurant I tripped on the sidewalk and fell HARD onto my right knee. I’m still not sure how I didn’t smash my face into the concrete but I didn’t. I literally couldn’t move for a few minutes because of the incredible pain. Thankfully,  a few very nice people came to my aid. The way my leg/knee looked and felt, the decision was made to call an ambulance and have me checked out. I’ll be honest, smashing my knee sure took the pain from those injections right away. Forgot all about them! 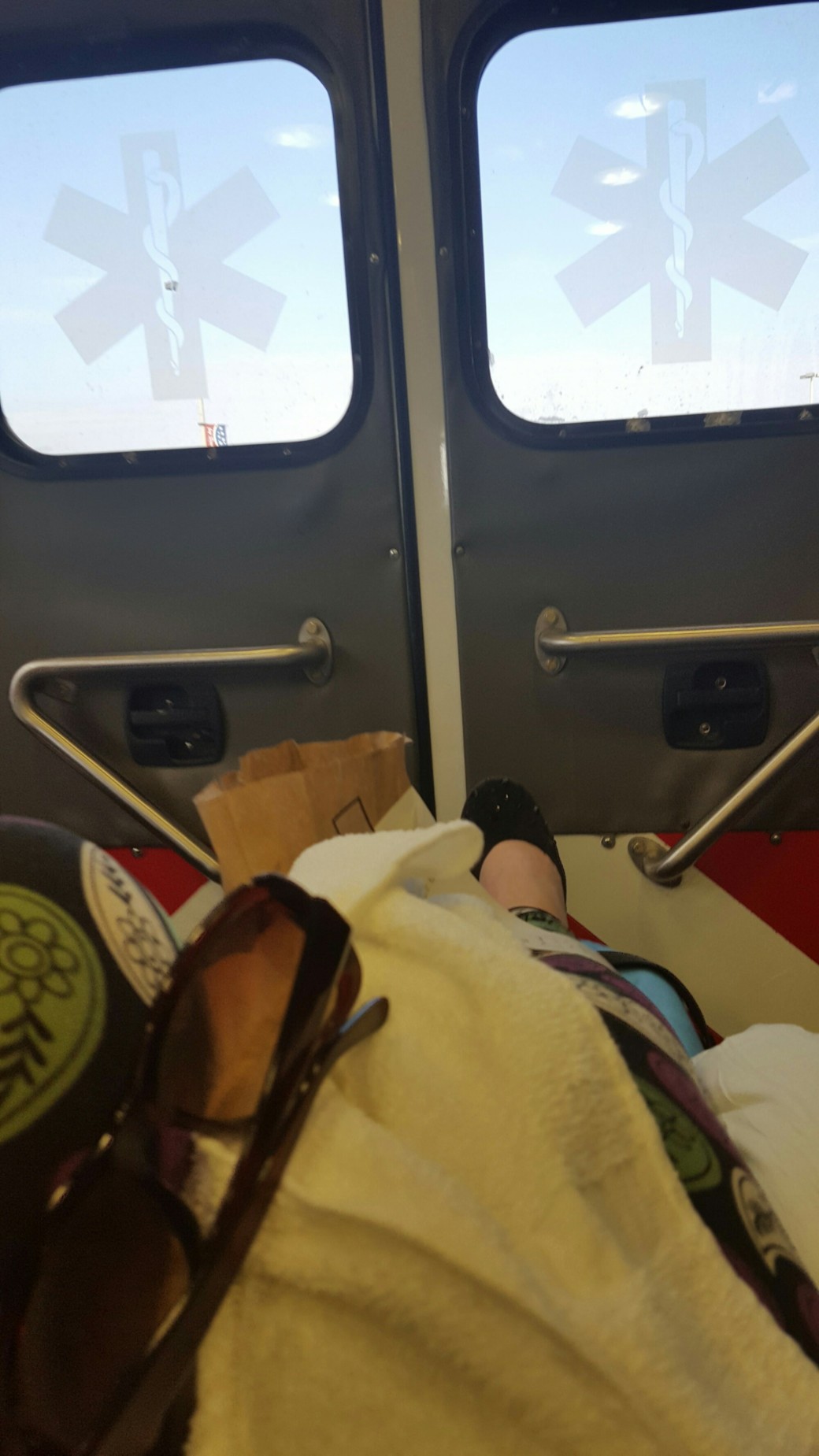 Big props to the Ambulance company and EMT’s that helped me. They were very nice. Unfortunately, the double dose of Fentynal they gave me while enroute to Strong Memorial didn’t touch the pain. I told Neil, the EMT who was stuck in back with me, that I have a high tolerance to narcotic pain meds and it would probably take a horse Tranquilizer to take the edge off. It was adorable that he thought I was joking. (See that bag in the picture? Because I ordered ahead of time I STILL managed to get Adam’s lunch thanks to the Manager at Panera’s!)

I was extremely lucky I didn’t break anything. After x-rays to my knee, hip and femur, it ended up being a very bad bruise to my knee cap. I was sent home with a brace, crutches and muscle relaxers. Not a fashion statement I recommend.

I was glad February was over. I was ready to start fresh with a new month. March had to be better, right??? Eh, not quite…..

Wednesday March 8th, I woke up with a fever of 102°. This was not good. Rule of thumb is that when you are on a medication that affects your white blood cells, any time you run a fever of 100.5° or higher you must call your Oncologist. Most of the time you end up in the ED.

I called. They ordered labs and based on those would make further decisions. At the time I had no other symptoms other than a wicked headache.

Next day, my chest began to burn. Still had that fever. Labs were fine. I was told to “keep in touch”. Um, OK? I debated much of Friday about seeing my GP and ultimately decided against it because I was afraid I would end up in the hospital.

By Monday, I was a wreck. I was weak, my chest felt like all my ribs were broken and I had trouble catching my breath. I saw my GP. She ran some tests and when she called me the next day and told me I tested positive for the flu, I couldn’t believe it.

This is why I have to be very careful about who I’m around, making sure I wash my hands all the time and staying away from people that are sick or getting over being sick. I did have the flu shot but because my immune system is weakened and because of the medications I take comprise it even further, I’m at a high risk for, well, everything.

It’s also going to take me longer to get over this. I’m told I’m going to feel sick and generally crappy for another 2 weeks. It also means I had to stop my chemo meds. I need to give my body a chance to bounce back. That may not sound like a big deal…missing a few pills, but when 21 chemo pills cost $10,950/month and I can’t take 6 of them, that’s a loss of $3,128.58.

If all this wasn’t bad enough, thanks to my craptastic immune system and catching the flu, Adam ended up with it too. At least I was able to get him Tamiflu so he’s managing. But the guilt is there nonetheless.

5 thoughts on “Trying To Catch A Break”